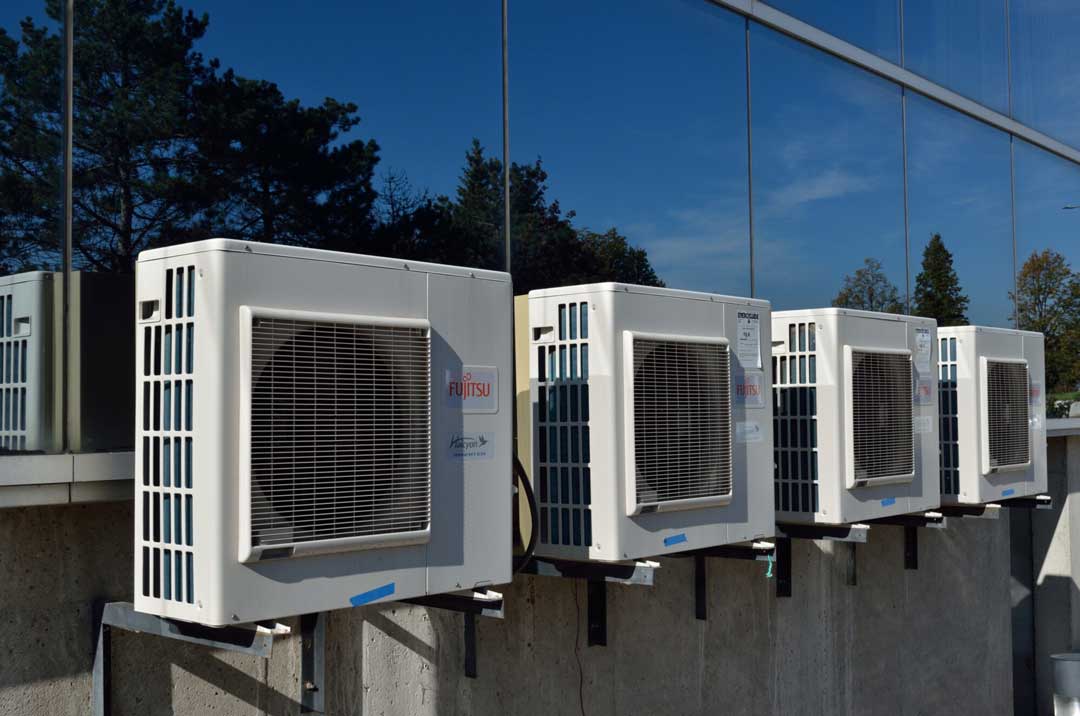 Perhaps the most sophisticated commercial HVAC system is the variable refrigerant flow system. This system is comprised of a series of heat pumps, each of which is positioned in a different area of the building. These heat pumps have the ability to provide both cold and heat, allowing them to adapt easily to the changing weather.

Unlike many HVAC systems, this one doesn’t require a duct system. Instead, because the heat pumps are positioned in different areas, they can deliver air throughout the entire building directly.

The interesting thing about a variable refrigerant flow system is that it utilizes just a single condenser. This condenser is connected to all of the heat pumps and is able to regulate the amount of refrigerant that it sends to each. As such, this system is able to adjust temperatures in different rooms of the building, all the while using just small amounts of energy.

In truth, this commercial HVAC system is the cream of the crop. It might be a little more expensive than some of the other options but, thanks to its energy efficiency, it will help cancel out some of those initial costs over time.

A variable air volume system is similar to a variable refrigerant flow system in that it’s able to accommodate different temperatures in different rooms throughout its corresponding building. However, it differs in the way that it does this.

See, this system doesn’t have different heat pumps set up in a variety of different areas. Instead, it makes use of a series of ducts. Like a standard central AC, it sends air through these ducts from a single location point.

Dampers are controlled by zoned thermostats. These thermostats are set to desired temperatures, which then indicate to the dampers how open they should be.

Variable air volume systems are highly efficient, though not quite as efficient as variable refrigerant flow systems. That said, they’re cheaper to install, and therefore might be a better option for you.

The next type of unit that we’re going to discuss is the ductless mini-split system. This is an HVAC system that mounts to the interior of a room’s wall. On the opposite side of its interior blower exists a condenser, allowing it to work its magic in a compact area.

A common complaint about ductless mini-split systems is that they’re visible on the inside of the building. In other words, those walking through your building will be able to see them protruding out of your walls. That said, they’re fairly aesthetically pleasing, and won’t do much to impair the overall aesthetic of your property; just think of them as an alternative to vents.

It’s important to note that every ductless mini-split system is a self-contained unit. It has no connection to the other units installed throughout the building. This can be bad in that they require more overall energy in order to run; however, it can also be good in that they allow for precise temperature variations from room to room.

If you have a small commercial property, a ductless mini-split HVAC might suit you fine. For anything on the bigger side, you’re advised to choose a different option.

The last type of HVAC system you should know about is the rooftop unit. Rooftop HVAC units are comprised of both a condenser and a blower. They’re attached directly to the top of the building’s roof and are connected to a duct system below.

As these units produce air, they push it down into the ducts, which then deliver it to different rooms throughout the building. In this sense, they’re like central ACs in residences.

It’s important to note, however, that a single rooftop unit isn’t always able to accommodate an entire building. If your building is on the large side, you’ll need several of these units to get the job done. The ideal buildings for these types of HVAC units are on the small side.

Curious as to how outdoor weather might affect a rooftop unit? In general, it doesn’t. These units consist of heavy-duty steel, which protects internal components against rain, snow, and wind-throw objects.

What’s the Difference Between Commercial and Residential HVAC Systems?

As you might expect, commercial HVAC systems are much larger than their residential counterparts. While a residential system only has to cool down one house, a commercial system can be responsible for thousands of square feet of office space, warehouses or retail space. This means commercial systems need a lot more power in a lot bigger package.

Residential systems are usually just one package or split unit. Commercial systems are much more complex in comparison since they have to support climate control in a large number of rooms. Cooling or heating an office building or apartment complex isn’t easy, so commercial HVAC systems have specialized equipment to help them get the job done.

How to Choose the Right Commercial HVAC System

With several different types of commercial HVAC systems available, it’s no wonder that choosing one can be a difficult decision. Here are the two main factors to consider when trying to choose one system over the other.

Not all commercial buildings are created equal, and different types of buildings have different cooling and heating needs. For example, variable refrigerant flow systems are great for mixed-used facilities, but not so great for large open indoor spaces like assembly halls or convention centers.

This is perhaps the most important factor. At the end of the day, the best commercial HVAC system is the one that’s in your budget. Variable refrigerant flow and variant refrigerant volume systems are generally more expensive than other options, and might not be right for your property if you’re on a tight budget. On the other hand, ductless mini-split systems can be an economical choice for smaller buildings.

Learn More About the Different Types of Commercial HVAC Systems

In truth, we’ve only discussed the highlights of the different types of commercial HVAC systems. There’s much more to learn about the many types of HVAC systems commercial properties utilize.

Contact us now to start the discussion or to receive a free quote!

Back to The Different Types Of Commercial HVAC Systems Explained

We Proudly Serve the Southeastern PA, Central
and Southern NJ and Northern Delaware Areas Only